Are you still watching *inserts TV show*? This is a popular phrase with which many of us are all too familiar. “Binge-watching” is a term famously associated with Netflix and is defined as watching many or all episodes of a television series in rapid succession1. With 63% of households in America having access to a streaming service (examples include Netflix, Hulu, Amazon Prime), trends show that more and more individuals are watching television in larger doses2.

In a survey published by Netflix in 2014, 61% of participants reported that they binge-watch on a regular basis, which the majority of participants defined as 2-6 episodes per sitting1. In our present, media-centered culture, it may be even more difficult to make healthy changes related to binge-watching. Influential internet sources frequently encourage unhealthy television-viewing behavior. For example, if you look up “binge-watching” in a search engine, many results will feature titles such as “TV Shows You Must Binge-Watch Right Now, Ranked”. I recently had lunch with a friend, who mentioned that he and his wife had purchased a 2-week HBO trial and have been staying up late to catch up on the seasons before their trial runs out. Is watching the epic series “Game of Thrones” worth losing precious hours of sleep? While the George R.R. Martin fan in me says “yes,” skipping out on sleep is detrimental, especially when this behavior is occurring more often than not.

Many individuals consider sleep negotiable and believe they can borrow sleep time in order to do other activities they consider more important, such as working or studying3. However, a recent study in the Journal of Clinical Sleep Medicine, the first to look at associations between binge-watching and sleep, argues that sacrificing sleep has far-reaching effects. Researchers in this study surveyed participants, asking about sleep and television patterns. They found more binge-watching was associated with higher levels of insomnia and fatigue, and poorer sleep quality4. These results were not shown for participants who did not identify as binge watchers. Therefore, the researchers proposed that the loss of sleep was due to increased cognitive arousal (being mentally alert) and involvement with the intense narrative structure and characters in “binge-worthy” shows. This caused individuals to stay up late to ruminate over what they just watched. 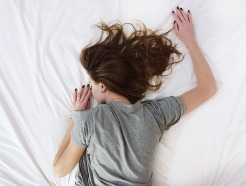 It was also reported in this study that 71% of binge-watching is unintentional, meaning individuals do not plan to watch multiple episodes, but are unable to stop watching a due to high suspense or engrossment in the plot and/or characters. Netflix has responded to this concern by including an automatic prompt for viewers after a certain number of episodes of a show, asking if the viewer would like to continue watching.

This trend of increased television viewing is harmful to your sleep, which by extension, could affect your health. Inadequate sleep has been recognized as a public health epidemic by the CDC and is associated with chronic diseases, such as obesity, type II diabetes and cardiovascular disease5.  Other negative health conditions include cancer, poorer quality of life, depression, and increased mortality6. Perhaps it is time we wind-down before bed and take our sleep schedules a little more seriously.

What is good sleep hygiene?

According to the National Sleep Foundation (NSF), sleep hygiene is defined as “a variety of different practices and habits that are necessary to have good nighttime sleep quality and full daytime alertness”6. Through thoughtful practice, individuals can improve physical and mental health, and prevent negative health consequences, such as poorer quality of life and loss of productivity6. Sleep experts recommend numerous tips to improve sleep hygiene. Individuals should maintain a consistent sleep schedule by going to bed and waking up around the same time each day of the week (including weekends), in addition to avoiding caffeine, alcohol, nicotine, and large meals before bedtime7. The NSF also encourages the implementation of a relaxing bedtime ritual to help wind down, such as reading a non-stimulating book or yoga, while avoiding activities close to bedtime that may cause stress or anxiety, making it difficult to fall asleep7.

How does arousal affect sleep?

Binge-watching keeps our brains distracted even after the show has concluded, delaying the onset of sleep. (Creative Commons)

As previously stated, arousal and sleep are mutually exclusive events, meaning high levels of both cannot occur at the same. When adrenaline, an arousal hormone associated with strong emotions (fear, excitement, anger), is secreted, our brains become too distracted to fall asleep, pushing back sleep onset and decreasing sleep quality8. Since “binge-worthy” shows elicit these same emotions (unlike less stimulating shows), they contribute to this increase in arousal that prevents the “sleep pathways” from activating. When sleep is disrupted in this manner, the prefrontal cortex (a key structure in performing executive functions) is impaired, rendering us unable to adequately make plans, organize thoughts or pay attention to our surroundings when awake10,11. Adolescents are particularly susceptible to these deficits, as parts of the prefrontal cortex in this population are still developing and will continue to develop into young adulthood (~mid 20’s)11.

Although the 18-29 year-old group is binge-watching the most, younger teens are also increasing their screen-time. Young teens now average 2 hours per day watching “can’t miss” shows and posting reactions to social media12.  As the next generation comes of age, more individuals are growing accustomed to binge-watching culture. This could mean increases in television viewing (i.e. sedentary behavior) and compromised sleep will be seen in even younger age groups. This is a major concern as sleep plays a critical role in maturational processes and brain development10,11.

It is still unknown whether or not “relaxing” television shows share this same effect4. Perhaps watching a relaxing nature documentary instead of more emotionally enticing shows (e.g. “Chopped” or “Breaking Bad”) before bed would have the opposite effect on sleep. Until further research is complete, it is probably a good idea to practice good sleep hygiene and incorporate a healthy, habitual routine before bed.