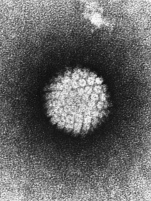 HPV is a virus, which is a microscopic parasite that needs a host cell to survive. In humans, these host cells are epithelial cells that line our tissues, separating our body from the “outside”. For example, the lining of the throat and cervix is epithelial cells. The virus can enter the lower layer of these cells via microscopic abrasions where it begins its lifecycle. The virus binds to receptors on these cells and enters. It then makes its way to the nucleus (where our DNA is) and hijacks our machinery, replicating its own DNA and changing the epithelial cells’ normal lifecycle. The change in lifecycle leads to small warts, which are made of cells that proliferate fast and die fast, allowing new virus to be spread from the dead cells and infect more cells.

Fortunately, our immune systems are usually able to clear the active virus quickly or stop it before any warts even appear, meaning most people who are infected never show any symptoms. But the relationship between HPV and cancer is not dependent on active infection. Even if the virus is able to enter only a few cells, it can increase the risk of developing cancer.

How can HPV lead to cancer?

When our own normal epithelial cells are ready to divide, they must replicate all the DNA in the cell so two new cells can form. When this is being done, sometimes, the DNA accidentally breaks, which can lead to mutations. Normally when breaks and damage are accumulating, a “fail-safe” protein called P53 recognizes the danger, and a cell will undergo an event called apoptosis, which kills the cell, preventing it from accumulating too many mutations and becoming cancerous. However, when HPV is inside the cell, it makes proteins called E6/7. E6/7 can actually degrade P53 and force a cell to continue growing even with mutations accumulating. This has two effects. 1. The cell with all the damage survives, potentially getting cancerous mutations, and 2. Because of all the broken DNA ends, the HPV virus itself can actually integrate into our own genome and become a permanent, unwelcome “guest”5. 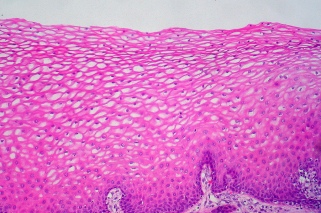 Normal Cervical Epithelial Cells. HPV can enter these cells and cause disruption. (Flickr)

When the viral DNA is integrated, a multitude of events that may lead to cancer can occur. Our own DNA is disrupted, which can cause pieces of DNA to break apart and be fused to areas they don’t belong. This can lead to dangerous mutations that cause the production of proteins telling a cell to grow and divide. To add fuel to the fire, the virus’s own (now integrated) genome is disrupted, meaning it may continue to produce E6/7 unregulated5,6. This means that cell’s P53 fail-safes are broken permanently, allowing more mutations to keep accumulating, as there is no means to sense the danger and eliminate that potentially cancerous cell before it forms a tumor. Over time, these dangers compound and a cell may become cancerous.

How does the HPV vaccine work to stop cancer?

The goal of the HPV vaccine is not to stop the cancerous cells, but to prevent an infection from ever happening in the first place. When the body first encounters a foreign invader such as the HPV virus, the immune system doesn’t recognize it right away. This gives the virus time to establish an infection and/or integrate its genome into many cells. However, once the immune system encounters HPV once, it makes antibodies to remember the virus. The second time, it can quickly eliminate HPV before it can enter a lot of cells. But the first infection is still enough to increase cancer risk. 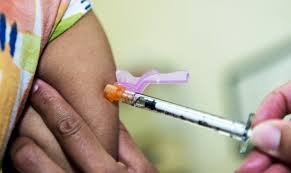 The HPV vaccine is effective at preventing an infection (Health.mil)

The vaccine is a way to “simulate” the first infection even though no real infection takes place. This is done is by taking one small piece of viral DNA and inserting it into the genome of a different organism: typically yeast. The yeast produces the single viral protein from the DNA, and the protein can be harvested. This small protein is injected into the patient7. The single protein is harmless without the rest of the virus, so no infection can occur, but the immune system doesn’t know that, so it produces antibodies to this protein, allowing it to remember for the next time it encounters the protein.

When this protein is encountered during a real infection alongside the whole virus, the immune system is ready. It quickly clears the virus before any integration can occur, meaning no cells get damaged and cancer risk is not increased.

All that said, HPV is very common, and most who have been infected will never develop HPV-specific cancer. If someone has been infected, he or she should not spend time and energy worrying. However, being aware of risk factors, getting vaccinated, and getting regular checkups are easy preventative measures that could save lives.