“Tell me what you eat, and I will tell you what you are”

This phrase, coined by Jean Anthelme Brillat-Savarin in the Physiologie du goût (The Physiology of Taste) was over a century ahead of its time. 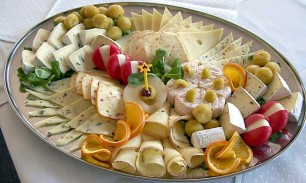 Some foods are better by virtue of their microbes. Cheese is one such food, matured by several types of bacteria (Wikimedia)

The commonly held aphorism is true in more ways than one. In one respect, it means that ‘the food you eat becomes a part of your person’,and this has long been known—amino acids from digested proteins are incorporated into our own proteins, and the energetic sources from our diet, such as sugars or fatty acids, are added to our own stores of energy. In another respect, the quote can mean that the food you eat influences ‘who’, or ‘what kind of person’ you are. This interpretation is also true– the substances you consume can alter your brain chemistry, and thus behavior (‘who’ you are), in manners too complex for a single blog post.

I will discuss the ways in which food affects our brains in a four-part series. Each part will examine a critical substance in food (microorganisms, carbohydrates, fats, and proteins) and the ways in which it alters or is central to behavior.

This first of these parts concerns a fascinating route by which diet can change the brain, and that is through our microbiome, the ecosystem of microorganisms such as bacteria, archaea, protozoa, fungi, and viruses that live on and interact with our bodies. Each adult has about 1 kg of these microbes, which are highly diverse, cumulatively containing approximately 100 times as many genes as the human genome.

The diversity and composition of these microbes in the gut is strongly influenced by diet.

For example, mice fed a plant based low-fat diet have a microbial profile that is completely altered by exposure to a high-sugar, high-fat or ‘western’ diet, which increases the proportion of several classes of bacteria, including Erysipelotrichi and Baccili. Due to the variety of microbes and the fledgling understanding of how individual types of microbes function within a host, the meaning of specific microbial ‘profiles’ is not entirely clear.

We do know however, that together these microbes are very active in host metabolism, immunity, and even direct brain function.

Influence on metabolism affects the brain

Microbes participate in metabolism in part by producing bile acids to help digest food and by synthesizing choline and short-chain fatty acids (SCFAs)1. Deficiencies in choline or SCFAs can cause fatty liver disease or even cirrhosis. Additionally, butyrate derived from the microbiome is necessary to regulate energy use in the colon2. Many of the metabolites produced by microbes are also active in the nervous system, and the bacterium Bifidobacteria infantis can even act as an anti-depressant through its regulation of kynurenine/tryptophan metabolism, similar to the actions of some antidepressant medications such as elective serotonin re-uptake inhibitors (SSRIs), which seek to increase the concentration of synaptic serotonin3.

Influence on the immune system affects the brain

Gut microbes also affect the immune system. The SCFAs produced by gut microbes that are necessary for a healthy liver also regulate the activity of various immune cells, including macrophages and T-cells4. These cells regulate inflammation, and the molecules they secrete directly communicate with cells in the brain. For example, it is well characterized that the use of cytokines (molecules frequently secreted by immune cells) to treat cancer or hepatitis C can lead to behavioral alterations such as depression5.

The microbiome can also have a more direct influence on brain chemistry by altering neurotransmission in the enteric (gut) nervous system6,7. Because the enteric nervous system communicates with the central nervous system (for more in depth coverage, see this excellent post by Alli Fries), the activities of microbes invisible to the naked eye can actually regulate levels of the neurotransmitters: GABA, norepinephrine, serotonin, and dopamine in the gut. Through the connections between gut and brain, these microbes can alter mood, emotional state, and anxiety6,8.

Mapping behaviors related to the microbiome

The range of behaviors, biological route by which they are influenced by microbial composition, and the degree to which they are influenced is difficult to map, given the diversity of microbes which can alter human health. These findings imply that the microbiome can have as diverse and far-reaching consequences to human health as an organ, and some even refer to the microbiome as a ‘virtual’, or ‘acquired’ organ. However, the full functionality of this organ is unclear. To illuminate the role of microbes in various behaviors and in disease directly, researchers study mice that lack a functional microbiome. These mice, termed ‘germ-free’ or ‘GF’, are readily distinguishable from normal mice in part on the basis of how they behave.

GF mice often display traits associated with autism9. For example, GF mice do not prefer interacting with novel, or ‘new’ mice over other novel objects. Other studies have found GF mice to have an exaggerated stress responses10, and display symptoms that indicate anxious and depressive behaviors11. These data imply that microbes can prevent the development of these behaviors.

In support of that claim, the microbes found in human psychiatric patients with autism or depression also deviate from normal patients. Microbiome data suggests that in major depressive disorder, patients have more bacteria from the phyla (large categories of bacteria) Bacteroidetes and Proteobacteria, and fewer bacteria from the phylum Firmicutes12. Microbiome data on autism spectrum disorder patients suggests various other disruptions in the microbial community, including higher levels of Clostridia, Desulfovibrio, Sutterella, and Bacteroides, and lower levels of Firmicutes, Prevotella, and Bifidobacter compared to healthy control subjects. Some aspects of these psychiatric patient microbiomes are similar (Bacteroidetes and Firmicutes tend to move in the same direction due to psychiatric illness), suggesting that mental illness could either cause or be caused by a disruption in the composition of microbes.

This further suggests that, in the long-term, mental disorders could be treated by modifying the levels of specific microbes. Unfortunately, we are still far away from being able to confidently make such manipulations. However, the methods of altering microbial composition, such as dietary changes and fecal transplantation, are minimally invasive, may prove to offer a simple approach by which people can improve physical and mental health. So don’t underestimate the importance of “thinking with your stomach”.

One thought on “The Bacteria that Mold Your Brain”