As much as we may enjoy denying it, our hearing is slowly, but surely, leaving us. In fact, considering how we often may follow the adage  “louder is better,” we’re probably headed for hearing aids sooner than we think. (That goes doubly for you, Skillrex fans).

…which is why we must thank our stereocilia and the proteins that are tasked with maintaining them.

I’d like to introduce you to myosin: the protein responsible for muscle contraction, force generation, maintenance of posture, the beating of our hearts, and oh hey, busting a move on the dance floor. Myosin proteins were originally thought to be restricted to muscle cells (hence, myo, meaning “originating in muscle”), but research has revealed that not all myosins are created equal. In fact, there is a large superfamily of myosins that, while sharing the same basic properties, are distributed in other tissue.

While studies on myosin have been going on for decades, it’s only recently that we’ve observed myosin in places where we might not expect it. One of these myosin subtypes takes residency in our eyes and our ears—worth knowing and caring about because of its implications on proper hearing, vision, and vestibular function.

Shaped like a golf club, myosin aggregates to form a thick shaft that grabs onto actin filaments, creating crossbridges during muscle contraction. To understand how myosin generates force, we can compare its activity to a system of thick ropes where myosins pull the actin filaments past them, making the muscle fiber shorter and signaling contraction over the entire fiber.

One type of myosin, called myosin 3 (MYO3), resides in the inner ear and plays a particularly important role in maintaining the scaffolding of hair cells, without which we would certainly be deaf. When a sound stimulus enters our ears, the frequencies are translated into physical motion as the sound waves disturb the basal membrane on which the hair cells sit. This physical disturbance deflects, or pushes the hair cells over, opening ion channels and initiating a signal to the central nervous system that what we are experiencing is noise. The signal then continues into the brain, where the noise is interpreted into a meaningful sound (like a voice speaking or a car horn telling you to move it). 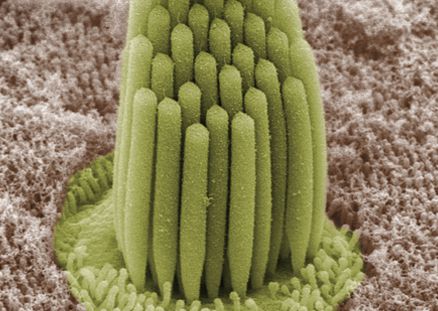 Hair cells must be maintained in the same way old buildings must be cared for; old parts must be removed and replaced by newer parts. The way in which MYO3 does this is both interesting and sophisticated. MYO3’s physical structure and ability to cycle between bound and unbound conformations on the hair cells allows it to climb the hair cells much like a scaffold ascends and descends the side of a skyscraper. Without this ability (like in cells that express a mutation in MYO3), hair cells are not maintained and become like a weed, growing out of control and leading to distortions in auditory perception (including deafness). This is thought to be one of the mechanisms by which progressive human hereditary deafness comes about.

There are currently no data that point definitively to myosin as a central player in restoring stereocilia after damage to the hair cells, such as a loud concert. Stereocilia from more external parts of the ear, in particular, have shown spontaneous regrowth after insult, but the mechanism isn’t certain. However, myosin is believed to be involved somehow, especially since, like revamped buildings emerging from rubble, these stereocilia also need a scaffolding mechanism to rebuild.

Scientists have studied the genetic bases of such mutations but have also attempted to control myosin function using a variety of laboratory techniques, from gene therapy to optogenetics. A paper published just two months ago by Bryant and colleagues employed blue light to control myosin speed and direction on actin filaments in vitro. Bryant’s group showed that the light induced a conformational change to the myosin protein basically allowing the protein to modulate the span of its steps along the actin cytoskeleton. In other words, the myosin can take baby steps or walk with longer strides, thereby modulating the speed of its “gait.” If applied to damaged stereocilia, this finding might positively contribute to the speed of regeneration.

Science still has a long way to go toward understanding the intricate protein milieu that contributes to the auditory system, and still further ways to go in using that knowledge to prevent hearing loss or even engineer better hearing. But research in myosin is paving the way for a better clinical approach to deafness and hearing loss.

Fate of mammalian cochlear hair cells and stereocilia after loss of the stereocilia. He, et al, 2009. J. of Neuroscience.