There’s nothing quite like a global pandemic to pique the public’s interest in medical science. COVID-19 has been a prime example, with individuals around the globe demanding immediate answers to a complicated problem and wondering why scientists don’t seem to have this whole “communicable diseases” concept figured out. The modern media cycle has been rather unhelpful with the current situation, with a tendency to report on every new bit of data (often still pending peer review) as the next miracle solution. Additionally, there is an obsession with declaring every new public health measure and epidemiological statistic as unprecedented or even shocking. As the role of sensationalist and social media in modern science has been discussed previously on this blog by myself (Media and Medical Science: The Misinformation Age) and others (The liar, the snitch and the microbe: Tips to identify fake news in social media by Stephen Matthews and “Just setting up my twttr” by Raquel Buj), here I will focus on some precedents to the current COVID-19 situation and what we can learn from the annals of history. 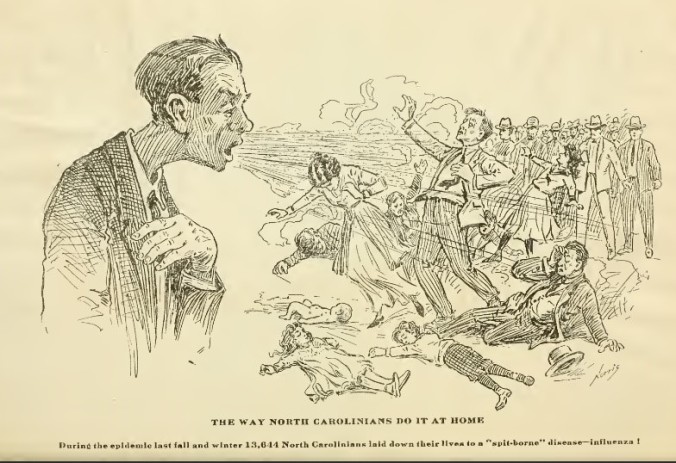 The Black Death, or Bubonic plague, was a pandemic so famous throughout history that many still refer to the occurrence today as “The Plague”, as though it were the only pandemic to ever ravage the world. This deadly pandemic was actually one of several instances of widespread outbreak of Yersinia pestis, a bacterium responsible for the characteristic symptoms of the Bubonic plague. These symptoms include eponymous buboes as well as the more deadly necrosis and septicemia that may result from bacteria reaching the bloodstream1. Evidence of Yersinia pestis plagues have been found at archaeological sites dating to BC, but the famous Black Death plague did not occur until around the middle of the 14th century. The Black Death plague was responsible for killing between 20 and 60% of the European and surrounding populations, making it the deadliest plague in recorded history. People of the time were adherents to the miasma theory of disease and thus believed all disease, including the plague, could be attributed to “bad air” – that an environment with stale or foul-smelling air caused sickness. Despite this misattribution, both quarantining and social distancing were practiced in an effort to prevent plague spread and this period of history is thought to hold the first instances of quarantines as we define them today2. I bring this bit of history to attention not because it represents any revolution in medical science (unfortunately the miasma theory of disease would persist until germ theory gained a solid foothold in the mid-19th century), but because it demonstrates an early understanding of the value of social interventions to curb plagues. Even without full comprehension of what causes disease, humans hundreds of years ago were astute enough to observe that limiting contact with fellow humans reduces the spread of sickness and used that knowledge to their advantage.

A more modern plague that gives better precedent to the current situation (thanks to more complete historical records and improvements in medicine) is the 1918 influenza outbreak commonly referred to as the Spanish Flu. This pandemic was particularly deadly due to two unusual aspects of the disease: the individuals who were at highest risk for severe disease and the timing of the outbreaks. Regarding the first point, it is most common for viral respiratory diseases such as influenza or coronavirus to cause the most severe disease in traditionally at-risk groups such as the very young, the elderly, and the immunocompromised. The 1918 influenza outbreak caused by the H1N1 virus was unusual in that many of those who died from the virus were otherwise-healthy young adults. This has since been hypothesized to be due to a phenomenon known as a “cytokine storm”, or what is essentially an overly-strong reaction of the body’s immune system to a pathogen. Such an overreaction can result in tissue damage at the site of infection – in this case the lungs – and therefore increase the risk of mortality in those with a strong immune system. The second feature that made the 1918 influenza uniquely deadly was that the outbreaks coincided with the first World War. For a virus that is deadliest to young, healthy adults, the rapid mobilization of American and European soldiers across long distances and in very close quarters is an extremely hospitable environment. It should come as no surprise that the H1N1 virus ran rampant through military camps and was responsible for more deaths overall during the course of World War I than all combat combined3. The 1918 influenza outbreak was also an issue on the home front, and lead to several public health measures that we see reflected in the COVID-19 pandemic today. Such measures included closures of many public facilities and gathering places, including schools, churches, and even factories. The influenza also caused the cancellation of public events such as parades – which were more common than usual for the time to support the war effort. Isolation of sick individuals and the use of recently popularized disinfectants and medical masks were also commonplace, with mandatory face masks even being implemented in some instances. Studies of the 1918 influenza have found that these public health measures were moderately successful in reducing mortality from the virus, but the delay in enacting and early repeal of these measures diminished their impact4. This is extremely important in light of the current pandemic, as the lifting of social distancing and sanitary measures because the outbreak “seems to be under control” could result in the repetition of this unfortunate situation if measures are eased prematurely.

The last pandemic I want to discuss is highly unusual because it was fictional yet proved useful to epidemiologists in modeling a disease in the modern world: The Corrupted Blood incident. This pandemic occurred in the multiplayer online game World of Warcraft during September of 2005. The cause of this virtual pandemic was an error that allowed the disease-like effect of a high-level boss’s spell to leave what was meant to be a limited in-game area and spread to other characters. I highly recommend the Wikipedia article on this phenomenon because it is a fantastic read. Essentially, the animal companions of player characters could gain this “corrupted blood” effect while in the intended area. While a player character would have the effect removed upon leaving the area, as intended, a programming oversight allowed animal companions who were dismissed while the effect was active and re-summoned later in a different area to retain the effect. This spell effect and its consequences had remarkable parallels to real-world disease, including the ability to spread through asymptomatic individuals (non-player characters), occurrences of uninfected characters self-isolating in less populated areas to avoid infection, and even instances of infected individuals who purposefully tried to spread the disease5. These parallels have allowed epidemiologists the unique opportunity to study the human component of a modern pandemic in a simulated environment, and the observations of player behavior can be applied to the current situation with little need to strain the imagination.

There is a quote that gets thrown around often by those who wish to sound wise in the ways of the world: “Those who do not learn from history are doomed to repeat it”. While this may be an apt observation regarding the current state of the world, I much prefer the modified: “History doesn’t repeat itself, but often rhymes” when it comes to medical science. We can take some lessons from past pandemics – most clearly that public health measures such as shutdowns and masks are much more effective when applied on an extremely cautious timeline – but it is also important to remember that history can’t precisely repeat itself. COVID-19 is a new disease with new challenges, and it is important to remember that we cannot expect it to behave in the same manner as the viruses responsible for previous pandemics. We can, however, take this opportunity to learn as much as possible from this part of history in order to better apply our body of knowledge to problems of the future. It is vital that we proceed through the coming months with an abundance of caution and an eye towards gathering as much good data as possible. With this, we can hope to ensure the least negative possible outcome of our modern-day plague and plagues yet to come.