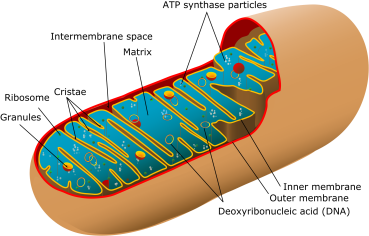 The mitochondria is colloquially called the powerhouse of the cell (Wikimedia)

What is the Mitochondrial Genome?

When referring to the genome, most people think of 46 chromosomes, 23 from mom and 23 from dad.  The chromosomes are made of DNA,specifically DNA within the nucleus of our cells, and they encode for nearly 25,000 genes that make us who we are. However, what is often neglected is a second genome that is passed directly from mother to child, the mitochondrial genome. The mitochondrial genome resides outside the nucleus in mitochondria, which are found in all eukaryotes and are essential for generating ATP— the energy the cell needs to survive. The mitochondrial genome consists of just 37 genes that encode 13 proteins1. The proteins are mostly enzymes that facilitate the production of ATP, which means they are essential. Just as mutated genes in the nucleus can lead to illness, diseases can arise from mutations in mitochondrial DNA2. These mutations can lead to problems involving muscles, the endocrine system, nerves, brain, heart, and liver, and many can be fatal in the first few years of life. At this point in time, there is no treatment for mitochondrial diseases, but it has become a growing area of biological research in recent years1.

How is the Mitochondrial Genome Inherited?

When sperm and egg meet, both the sperm and egg carry nuclear chromosomes, which is why people inherit genes from both mother and father, but the sperm does not carry inheritable mitochondria. Mitochondria that powers the sperm is located in a portion of sperm that is lost at fertilization. This means that the egg’s mitochondria are all the child will inherit; the effect is that the mitochondrial genome is passed exclusively from mother to child.

What is Leigh Syndrome?

Genetic mutations can lead to a variety of diseases (Vimeo).

Leigh Syndrome is a neurological disorder that can be caused by a variety of mutations in different genes in both nuclear DNA and mitochondrial DNA, but about twenty percent of Leigh Syndrome patients have a causative mutation in their mitochondrial DNA3. It progressively causes loss of physical and mental abilities, and patients eventually lose the ability to breathe3. These symptoms are typically first seen as a young child, although some may not show symptoms until later in life. On average, patients die within a few years of the symptoms appearing.

How Does a Child Inherit Leigh Syndrome?

How Can We Combat Mitochondrial Diseases?

The concept of replacing mutated DNA with healthy DNA is an ever-growing research area. In September 2016, a ‘Three-Parent Child’ hit the media. A couple from Jordan were referred to Dr. Zhang of the New Hope Fertility Center in New York to seek a mitochondrial transfer technique, because a quarter of the mother’s mitochondria held a mutation that caused Leigh Syndrome4. The couple had already endured four miscarriages and lost two children to Leigh Syndrome, one at age six and one at eight months5. Dr. Zhang agreed to try the mitochondrial transfer technique called maternal spindle transfer, where the nucleus of the mother’s egg containing her nuclear DNA is injected into a donor female egg. The donor’s egg has its nucleus removed but has healthy mitochondria4. Dr. Zhang and the couple traveled to the New Hope Fertility Center in Mexico to perform the procedure because this work is not currently allowed in the United States. The United States Congress has banned the FDA from reviewing proposals that would change genetics of humans, and this technique falls into that category4.

Was the Transfer Successful?

Dr. Zhang gave a talk at the American Society for Reproductive Medicine Conference in Salt Lake City on October 19, 2016. There, he confirmed that the baby boy with the mitochondrial transfer is 6 months old and healthy. He reported that approximately 1% to 2% of the mother’s mitochondria remain within his cells, but the child does not have Leigh Syndrome4. The mother even noted that she had a better pregnancy than her two children with Leigh Syndrome. She was able to feel the baby kick and had no complications. The procedure was described as a success.

What are the Ethical Concerns Regarding Mitochondrial Transfers? 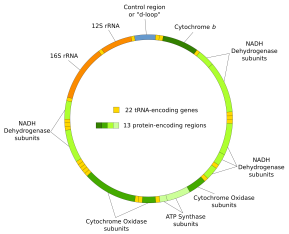 The mitochondrial genome is small, encoding just 13 proteins that do not contribute to a person’s characteristic or appearance. (Wikimedia)

Many scientists believe that the term ‘Three-Parent Child’ is a misleading way to present the mitochondrial transfer technique. They argue that the 13 proteins encoded in mitochondrial DNA do not contribute to a person’s specific characteristics and appearance6. Dr. Zhang also argues that his technique is done before the fertilization occurs, which negates the ethical concerns of tampering with a fertilized egg5.

Still, the idea of replacing a mother’s mitochondria with someone else’s has its critics. The child would have proteins encoded by three people’s DNA – one who is not his or her parent. Some predict that this could lead to psychological problems for the child later in life. Others also believe this technique is a form of genetic engineering and could be a slippery slope. Genetic engineering at the nuclear level has the capacity to affect all of humanity as genes are introduced or weeded out of the population. Those who believe that tampering with the “human person” is unnatural object to any artificial changes to the genetic code. There is also the societal impact concern of the slippery slope. Could genetic engineering produce a societal hierarchy? Where those with good genes sit at the top, while those with bad genes are destined to live their lives as second class? These questions will weigh against the potential benefits of curing genetic diseases as the gene editing debate continues.

What is Next for Mitochondrial Genome Editing?

Dr. Zhang mentioned that this is the first baby born with an egg containing constituents of two mothers and one sperm5. He predicts that the ‘Three-Parent Child’ method will be widely accepted in years to come. However, he also believes that acceptance will take time, just as in vitro fertilization techniques have taken time to be accepted by the public. He stated, “When the world’s first test tube baby was born in the U.K., in 1978, about 80 percent of the population were critical and only 20 were supportive. But today, we no longer think it’s immoral. For any new technology, there is a process of acceptance.6”