By: Amanda White, Research Technologist in the Department of Psychiatry

The Philadelphia Eagles are an exciting NFL team to watch because you never know which team is going to show up: the one that puts up 30+ points, or the one that loses pitifully to the New York Giants.

Watching a tennis match is just as exciting as watching a football game, but I find the experience much more vivid. As a tennis player, I recall the feel of new rubber tape on my racket, the short “pop” sound of a volley, and the sharp smell of a fresh tennis ball. During the Australian Open, I watched Serena bounce the ball a few times before looking across the net to her opponent and I felt the same anticipation before I serve in a match. As the point progressed, I felt like I was the one hitting forehand after forehand, and finally a backhanded winner at the net.

My own experiences seem to make watching tennis quite different from watching other sports. So what happens in our brains when we observe athletes of our own sport, or dancers of our own style?

More than 20 years ago, Italian researchers at the University of Parma revealed surprising results from their research with macaque monkeys. They found that the same groups of neurons that fired while a monkey performed a simple motor task (like grasping a piece of food) also fired when that monkey watched an experimenter perform that same task. These neurons were in an area of the brain called the “premotor” area, which helps an individual select an appropriate reaction following sensory input. Because these neurons were activated while observing another individual perform a familiar task, the researchers dubbed them “mirror neurons.” 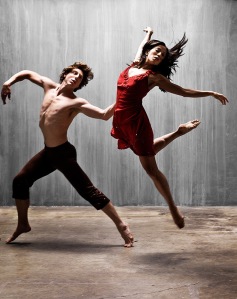 In a more recent study, researchers from University College London wondered whether individuals who have acquired precise motor skills would be particularly primed to observe those motor skills in others. To address this question, the researchers studied expert dancers of two different styles: ballet and capoeira. Both styles require incredible physical strength, balance, and finesse (The Dee Reynolds style of dance is more on my level).  However, since the sequences of movements in these two styles are very different, expertise in one style does not translate over to the other.

Ballet and capoeira dancers watched several short videos of both styles of dance while a magnetic resonance imaging (MRI) machine recorded their brain activity. Although all dancers watched the same videos, their brains responded differently based on their experience level. Dancers showed more parietal, superior temporal sulcus, and premotor cortex activity only when they watched their own style of dance. These brain areas are usually active while performing an action. These findings suggest that dancers were mentally rehearsing or mirroring the movements observed in the videos.

However, the researchers couldn’t be certain that level of physical skill was responsible for their results. Capoeira dancers might simply be more familiar with observing other capoeira dancers, and this visual familiarity could be responsible for strong reactions from mirror neurons. The authors designed a clever follow-up study to provide answer this question.

Expert athletes also show stronger responses in mirror neurons than novices when watching their sport. Researchers in Korea compared brain activity between women who had never participated in archery competitions and women from the Korean University Archery Association, all whom had more than 10 years of experience and who had competed in international competitions. The researchers recorded the participants’ brain activity as they watched several videos of an expert archer demonstrating how to shoot a bow.

As predicted, the expert archers exhibited more brain activity than novices in regions associated with motor functions including perception, attention to motion, and goal-directed behavior. Expert archers also exhibited higher activity in the dorsomedial prefrontal cortex, which is historically associated with “theory of mind,” or the ability to take the perspective of another person. Theory of mind is unique to humans and other primates. The researchers concluded that archers formed a mental representation of the state of mind of the archer in the video as he prepared to shoot.

I might be called lazy for lounging on the couch and binge-watching tennis matches, but my brain’s motor areas and mirror neurons are getting a workout!